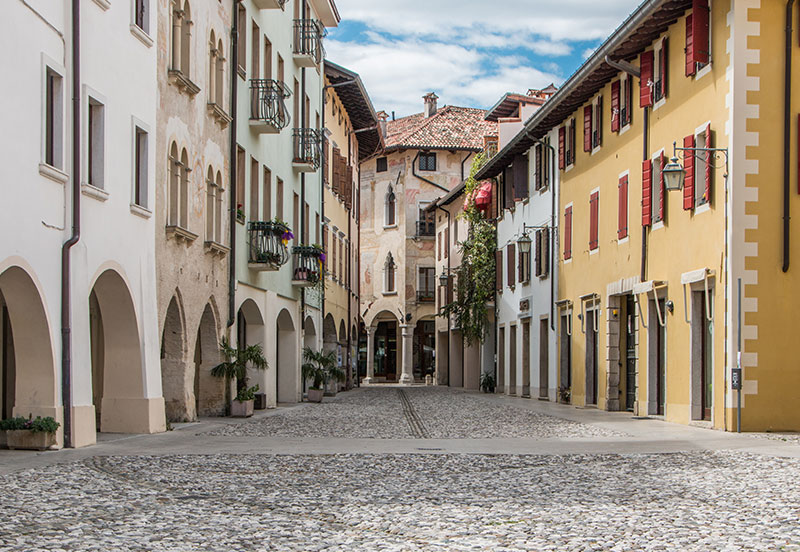 The Roman era and the Middle Ages

Spilimbergo gets its name from the Carinthian Counts Spengenberg, who settled here around the 11th century.

The first docu­­­­­­­­­ment that mentions the castrum de Spengenberg dates back to 1120; however, the site’s history goes back to Roman antiquity, as it was located near the Roman road that crossed the Tagliamento river connecting Sacile to Gemona and Germany. Moreover, the presence of the fortified settlement of Gradisca sul Cosa bears further witness to a millenarian settlement.

The history of the village intertwines with that of the Lords, who were among the most powerful in the region, and the ministeriales of the Patriarch of Aquileia. Their castle was magnificent, and over the years it was attacked by several adversaries, such as Ezzelino da Romano and Rizzardo da Camino.

During the Middle Ages, the town was an important transit and trade hub; in fact, to accommodate an ever-growing population, which included Lombard, Tuscan and Jewish exiles, they had to build three rows of walls.

On 4 October 1284, Walterpertoldo II laid the first stone of the cathedral, which is now the finest Romanesque-Gothic monument in Friuli Venezia Giulia. The Customs House, the Captain’s House, and the Loggia or Pergola – once the representative office of the magistrates, later a barn, a prison, a theatre, and now the Town Hall – were all built in those years.

On 10 August 1326, counts Bregonia and Bartolomeo promulgated the Statute of the Land of Spilimbergo, a set of laws regulating every aspect of social life, and in which the law of strength still prevailed on the strength of law. Six years earlier, on 2 December, the lineage had split into two branches (“di Sopra” and “di Sotto”). The border of their territories corresponded to the current area between Corso Roma and Via Cavour, from the castle to Tauriano, which still marks the northern part and the southern part of the town.

In 1420, the town and the entire land of Friuli fell under the domination of the Serenissima Republic of Venice. Spilimbergo became the scene of wars and civil unrest, including the clash between Strumieri (pro-Empire) and Zamberlani (pro-Venice), during which the castle was burned down in 1511. It was later rebuilt in Renaissance style and, in 1532, it hosted the Emperor Charles V. The beautiful Chronicle of that same period by Roberto faithfully tells the facts and events of the first half of the 16th century.

From the Renaissance to the 20th century

Spilimbergo reached its highest splendour during the 15th and 16th centuries, thanks to artists, such as the students of Vitale da Bologna (who left a cycle of over 500 sq.m in the cathedral), Zenone, Pilacorte, Marco Cozzi, il Pordenone, Amalteo, Narvesa, and Irene di Spilimbergo. The latter was one of Titian’s students and gained quite a reputation despite her untimely death. Irene, the daughter of Adriano and Giulia da Ponte, was born in 1541 in Spilimbergo. Her death in Venice in 1559 was commemorated by major Italian writers and had drawn the attention of Vasari, who defined her as a beautiful writer, musician, and well-versed in drawing.

Other literary personalities include Gian Domenico Cancianini, Eusebio Stella, and Bernadino Partenio, who set up an Academy that offered courses in Latin, Greek, and Hebrew humanities.

The 16th and 17th centuries saw the emergence of several families of considerable wealth and ingenuity, such as the Balzaro, Monaco, Stella, Cisternini, Fannio, and Santorini families, who contributed to the bourgeois fabric of the town. Their culture, palazzos, and trades gave a blow to the rigid mindset of the aristocracy and the immobility of commoners, who lived in a world characterised by deep social fractures and language barriers. On one side there were the rich and nobles who spoke Latin and Venetian; on the other, illiterate commoners who only spoke Friulian.

On the eve of the age of enlightenment, the first timid signs of change had started to emerge, as demonstrated by the commoners’ and the bourgeoisie’s increasingly frequent opposition to the counts.

With the Treaty of Campoformio in 1797, Spilimbergo fell under the Austrian rule. Those were the turbulent years during which many interesting liberal movements started to rise. Gian Battista Cavedalis and Leonardo Andervolti, both from Spilimbergo, played a major role in the resistance against the Austrians in Osoppo and Venice in 1848/49.

In 1866 Friuli was annexed to the Kingdom of Italy.

In 1922, the Municipality and the Humanitarian Society of Milan contributed to the establishment of the School of Mosaic Art named after Irene. Its students from all over the world enjoy a well-deserved reputation.

Spilimbergo is located on the right bank of the Tagliamento and was declared a city with the Italian Presidential Decree of 9 October 1968. Over the years, it has renewed itself, and has kept up with the times; however, its true identity is reflected in the monuments that bear witness to its glorious past.

The earthquake of 1976 and the reconstruction

On 6 May 1976, just after 9.00 pm, a violent earthquake shook the heart of Friuli for 57 seconds, leaving a trail of death, destruction, and desolation.

Spilimbergo suffered great damage to its historical heritage. The promptness with which the buildings and monuments were propped up saved them from the subsequent shocks, especially the violent one on 15 September. Spilimbergo was among the hardest hit areas, and one person was killed.

Nevertheless, the strength and tenacity of the Friulian people, together with the help and solidarity from all over the world allowed for a miraculous reconstruction that led to a new life and a new era of development, especially at an international level. That’s why Spilimbergo, together with other municipalities, were awarded a Medal of Merit with the following justification: “after the catastrophic earthquake, it faced the difficult reconstruction of its residential areas and its social, moral, and economic future with great dignity, spirit of sacrifice, and commitment. A beautiful example of civil merit and sense of duty worthy of the entire country’s admiration and gratitude.”